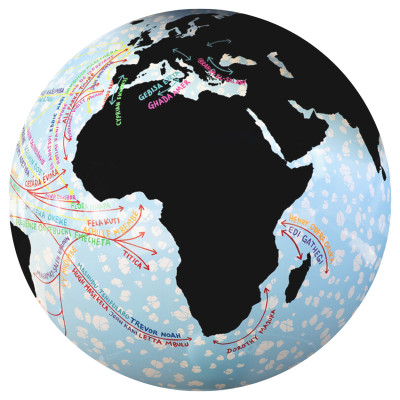 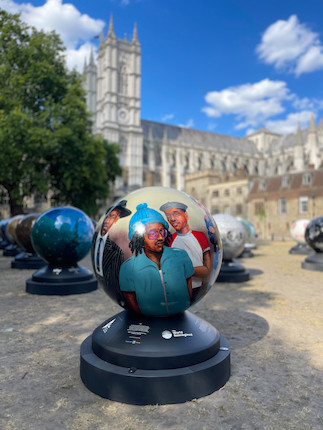 Own a similar item?

Submit your item online for a free auction estimate.

Looking for a similar item?

Our African Modern & Contemporary Art specialists can help you find a similar item at an auction or via a private sale.

The Transatlantic Trade in Enslaved Africans involved the transportation of enslaved African people by slave traders, mainly to the Americas. The trade regularly used a triangular route across the Atlantic and its Middle Passage and existed from the 16th to the 19th centuries.

A map that charts this triangular route, indicating the channels for the colonial trade in enslaved Africans, critically reflects the history that connects the African continent to the western world. However, by labelling the former trade routes with the names of African cultural practitioners and pioneers, historical and contemporary, it reverses the phenomenon of Western Enlightenment. African brilliance and intellectualism, formerly patronised and suppressed under colonial rule, is highlighted and celebrated.

On the map, the colonial trade routes are complemented with contemporary migration routes, transferring the colonial history into present-day Africa. A continent that is thriving culturally and economically, and reinvents itself beyond its colonial past.

On the map, the landmass is not divided into countries or states, denying the borders artificially created during the scramble for Africa.

The World Reimagined celebrates a modern, united Africa, that is reclaiming its strong and stable roots and gains influence and power in a globalised world.

Yinka Shonibare CBE RA studied Fine Art at Byam Shaw School of Art, London (1989) and received his MFA from Goldsmiths, University of London (1991). His interdisciplinary practice uses citations of Western art history and literature to question the validity of contemporary cultural and national identities within the context of globalisation. Through examining race, class and the construction of cultural identity, his works comment on the tangled interrelationship between Africa and Europe, and their respective economic and political histories.