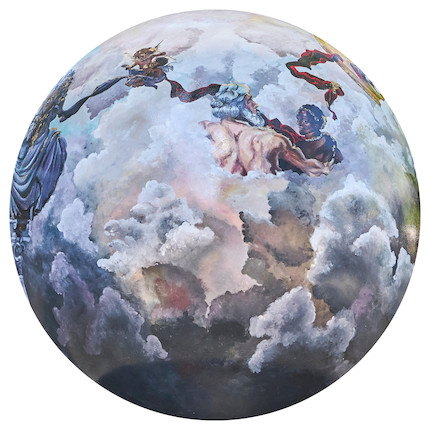 Dear Archives is a globe installation which gathers my mental montage on unpopular but renown historical figures. Learning history in schools through a mainstream lens has done a great disservice to history and how ethnic peoples see themselves in it. For example, growing up in school I vividly remember 'Roots', 'Twelve Years A Slave' or 'The Colour Purple' being audacious portrayals of the horrors of African slavery or racial injustice. Either we don't go far back enough, or we don't see history holistically. Since removing the colonial lens, I've come to learn that slavery and injustice was not unique to Africans or Black westerners; it was universal. Before the abolition of slavery in 1865, and before the 'free world', all peoples were enslaved. That being said, anything that is mainstream or taught in state school is questionable, and self-education is our own responsibility. Still We Rise is a theme that honours victors, not victims. By this, I mean African, Black westerners who were met with prejudice and used the opportunity to overcome, not remain victims, by being proactive and not reactive.James Forten innovated the original sail, owning a sail loft business worth millions, c.1800. He was friends with Paul Cuffee, a sea captain who built the first racially integrated school in Massachusetts. Septimius Severus, an African Roman Emperor came to Britain in the second century to strengthen Hadrian's wall. Black Aristocratic Art is a blog I created to honour the side of art history which is often overlooked, or simply unknown. The title originally was the rule but is now the umbrella theme. It is important for black communities in the west to acknowledge African individuals who had a high net worth, and pioneered in their spheres of influence.

As a figurative painter, Afro-Caribbean and British citizen at birth, I assess ethnic minority identities in the western world by creating iconic narratives through my portraiture. Living in London has taught me to use ethnic isolation as a platform of distinction rather than a victim collective, and to understand other artists who have felt non-British because of their ethnicity. Painting is the bridge that transforms my thoughts into visual action against misrepresentation. Each painting has a voice of its own; they ask questions that must be answered. Art history is a critical subject for me, because not long ago I realised that ethnic minority artists find themselves underrepresented in historical portraiture. Before a painting of mine reaches its finished form, it requires investigation into my model, and their stance in society. The women I paint are artists, business owners and intellectuals sharing their stories by inserting themselves into the narrative of European art history. I want Europe's diverse history to create a harmony between ethnic minorities and majorities in the gallery space, with the common denominator of healthy nationalism.