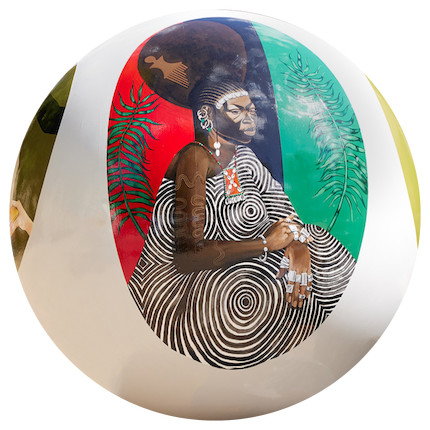 'Mama Africa' represents the common ancestor of all people of African descent. I wanted to depict her as a warming presence, adorned with jewels, beadwork, scarification markings, and an afro comb placed within her hair. She represents the rich culture and spirit of Africa, which was disregarded and somewhat forgotten through the forced displacement and enslavement of generations of African people. I wanted to show the wealth of Africa before the Transatlantic Trade in Enslaved Africans, and the beauty that still lives on.

The opposite side of the globe represents Britannia, a warrior-like figure who often represents the power and national pride in Britain. Here, her helmet is adorned with cotton, her trident replaced with a sugar cane, and her shield with the interior plan of a ship built to transport the enslaved; to acknowledge Britain's disregard for humanity, and the true history that was the engine of Britain's economy up until the nineteenth century.

Between these two portraits, I have depicted Matilda Mcrear. The last known survivor from a ship transporting the enslaved, whose birth name was Abake, meaning 'born to be loved by all'. Matilda was captured in West Africa, illegally sold at the age of two and taken to Alabama on the 'Clotilda', the last known ship to bring enslaved Africans to America, in 1860. Matilda died in Alabama in 1940 at the age of 83, neither having received reparations despite her efforts, nor returning to Africa. Matilda is remembered by her family as having scarification markings of the 'Abaja' type on her left cheek, indicating that she came from the Yoruba tribe. I have depicted Matilda seated upon a beaded Yoruba throne.

Opposite Matilda, the final part of my globe is a depiction of the wealth received by enslavers in order for abolition to have taken place. 46,000 enslavers were compensated twenty million pounds at the time, the equivalent of seventeen billion pounds today. British taxpayers only finished paying off this debt in 2015. Let us not forget.

Kione Grandison is a London-based, multi-disciplinary artist with a strong cross-cultural practice that spans across various interests, influenced by her Jamaican, German and British heritage. Working across different forms and media, Grandison produces paintings, mixed-media collages, sculpture, hand- painted clothing and nail art. Her work is interested in numerous subjects - from the Black beauty industry, Jamaican music and dancehall culture to traditional African adornment and tools of 'beautification', such as the hair comb.