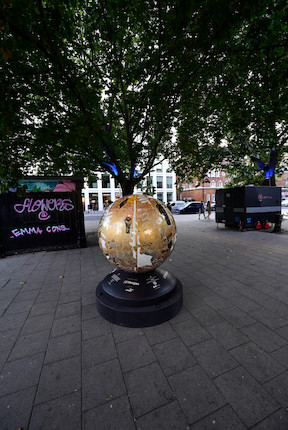 The complex triangular movement of material goods and enslaved labour between Europe, Africa and the Americas enriched colonial empires. The ghost of that movement exists today, echoing the same economic manipulation of resources. Throughout this movement of resources from the southern to the northern hemisphere, cultures have been dismantled and destroyed; their ritualised customs denied and demonised. And their most sacred artefacts that embodied cultural identity have been removed as booty, and through other unjust means. Interpreting the theme, A Complex Triangle, this idea is narrated through colour, symbols and historical icons which comprise the content of the globe entitled The Longitude Of Culture. Gold dominates the colour palette, signifying our precious planet and the gold that motivated Europeans to explore Africa in their thirst for riches and knowledge. Within the traditional cultures of Africa, symbols and motifs have always been used to document the changing historical narrative. Pulling from those traditions I have created my globe. Overlapping symbols, colours and shapes help convey the complex timeline linking the past to the present. Born out of the idea of the Adinkra symbol, 'Mpatapo' depicts the knot with no beginning or end - representing peace after conflict, emulating that unbroken line of connection. The recognisable slave ship, the gun, the lion, the plane, the Black Star to Garvey, the raised fist synonymous with the Black power movement and now Black Lives Matter, all have become icons of resistance against white supremacy. With the call for the return of many cultures' most precious artefacts, it is only right that African spiritual belief systems be recognised and acknowledged as justified frameworks through which we see the world and its history. The flow of knowledge from those indigenous cultures along the lines of longitude into Western culture has, and can, add to the discussions of our future world. Colours Code: Gold: Richness of our cultural inheritance and the main colour of the globe, representing the wealth along the Gold Coast - wealth that brought economic stability to those foreign cultures, but also drove the greed of Europeans and destruction of Africa's cultures. White: Closely associated with sugar, that sweetness which compelled Europeans, and committed hundreds of thousands to a life of enslaved labour to satisfy the taste buds of so few. Whiteness also fuels the concept of superiority and imposition of colonialists' religion on their subjects. Grey: The colour of iron from Europe used to trade with Africa. A material that became the main contributor to wars through the development of arms creating a devastating advantage in the Transatlantic Trade in Enslaved Africans and its use to dominate Africa. Copper: A natural material found in Africa played a major role in assisting the process of enslavement. Copper sheeting used on hulls reduced the weight of the ships transporting the enslaved human cargo, shortening the journey time across the Atlantic and reducing the number of slaves that died, improving the efficiency of this brutal economy.

Although a second-generation West Indian who grew up in London, Alvin Kofi's creative perspective is very much African-centred and he seeks to explore, learn and celebrate the traditional notions of African culture. From his formative years he has studied and practised African cosmology and this is evident in his work. Kofi studied graphic design at art school, but his preferred choice of expression is painting, and his preferred use of narrative, the human form. His figurative paintings re-examine universal themes through the Black figure drawing from ancient mythological stories that still have relevance today. Exploring these themes he plays with the representation of ideas which we hold on to layered with motifs and symbols that allow us to interrogate what we believe. Kofi is a multi-disciplined artist working in mediums across the public and private sector producing installations to sculptures but concentrates his practice around the expression of painting. Whichever medium he is using, his approach is to get back to materials that are authentic and organic to the conversation or question being had in the process. Alvin was a finalist in the Sky Arts Portrait Artist of the Year Award 2020, and he is one of the Highly Commended artists participating in the Ruth Borchard Self-Portrait Prize 2021 online exhibition of long-listed artists.